Welcome to the eighth and final part of The Nights He Came Home – A Halloween Retrospective! Over the course of October this new special column, in which I revisit all of the original Halloween films in anticipation of that most spooky season, will be running every Monday and Thursday. Then, beginning on the 26th of October, articles with the unifying theme of the horror genre will be posted, leading up to an article on my choice of the 10 greatest horror films ever made. Today we examine Halloween: Resurrection (2002), the final entry in the original Halloween series. For previous entries in this series, click here.

Halloween: Resurrection is without a doubt the very worst of the Halloween series. It’s not even because it embodies elements that lesser sequels share, such as terrible scripting and uninspired lazy direction. With Rick Rosenthal returning to the franchise, this should have been a great film; but Resurrection makes the mistake of trying to modernise the franchise beyond the Scream-like Halloween H20: 20 Years Later (1998). By making Resurrection an incompetent allegory for the internet age, Resurrection loses any vitality it could have had. It is at once modern and horribly dated in this respect. Add in several very annoying characters and a dreadful haunted-house-reality-show premise and Resurrection becomes completely unbearable.

After quickly despatching Laurie Strode (Jamie Lee Curtis) in the first five minutes, Michael Myers (Brad Loree) makes his way back to Haddonfield. There he finds that a gang of teenagers have been drafted into a live-internet-reality-show called Dangertainment, In this show they have to investigate the legendary Myers house to find clues to why he became a famed serial killer. Myers obviously isn’t happy with these goldilocks types and sets about killing them all.

The film suffers foremost because its premise is so lazily devised. As much as I wanted H20 to be the last sequel in the series, I would much have preferred another sequel starring Jamie Lee Curtis as the lead. That’s what I thought I was getting too; but she’s killed off in the first five minutes! I really didn’t like this element because after all Laurie has been through, she deserved to survive and be happy. Neither is provided to here.

Without either Donald Pleasence or Jamie Lee Curtis, Resurrection must instead rely on what Halloween has become famous for – stalking / murdering teenagers. Unfortunately after the slasher genre’s heyday this has become a standard element. So without either Pleasence or Curtis, Resurrection just feels like another tired slasher film that didn’t really have a point to be made beyond being a cash in. Halloween (1978) was the original slasher film, and it’s disappointing to see the series end on this lowest note.

There are a few recognisable stars in the film. Katee Sackhoff appears in a role totally against type. She is neither butch nor independent here, appearing as perhaps the most girlish and annoying character she’s ever played. It’s really weird and uncomfortable. Sackhoff made the right choice in taking stronger female roles for sure. Tyra Banks appears briefly but doesn’t really do much; hip-hop artist Busta Rhymes appears as one of the main characters, the founder of Dangertainment and is just an incredible unlikeable character. He likes kung fu movies and ends every sentence with the word “motherfucker.” Perhaps the role would have been funnier in another film; but it feels out-of-place and misguided in what should be a serious horror film. He’s funny but for all the wrong reasons. 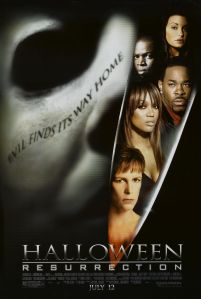 Halloween: Resurrection was a moderate commercial success with a worldwide $37.6 million gross. Critically the film was savaged. Plans for a sequel were made but eventually scrapped in favour of a reboot.

Ultimately Halloween: Resurrection relies on nothing but genre tropes, and this is why it is so thoroughly boring. It’s the worst of the series by far, a disappointment after the high-note of H20. I cannot in all good conscience recommend this film – avoid at all costs.

The Halloween series would be rebooted in 2007 with Rob Zombie’s remake. I’ve not heard good things, and considering it’s a different version of the character from John Carpenter’s original, The Nights He Came Home is going to end with this post. Thank you all for reading this special column series; I hope you’ve enjoyed reading these as much as I’ve enjoyed writing them. Of course my other special column series, It’s Alive! The Universal Monsters Saga is still on-going, but it had to take a break whilst I did this series. That will be kicking off again soon, and another semi-regular special column series is in the planning stages. Thank you for the continued support of this blog! Later this week there will be some more horror-themed posts for the season of Halloween, so I’ll see you then!