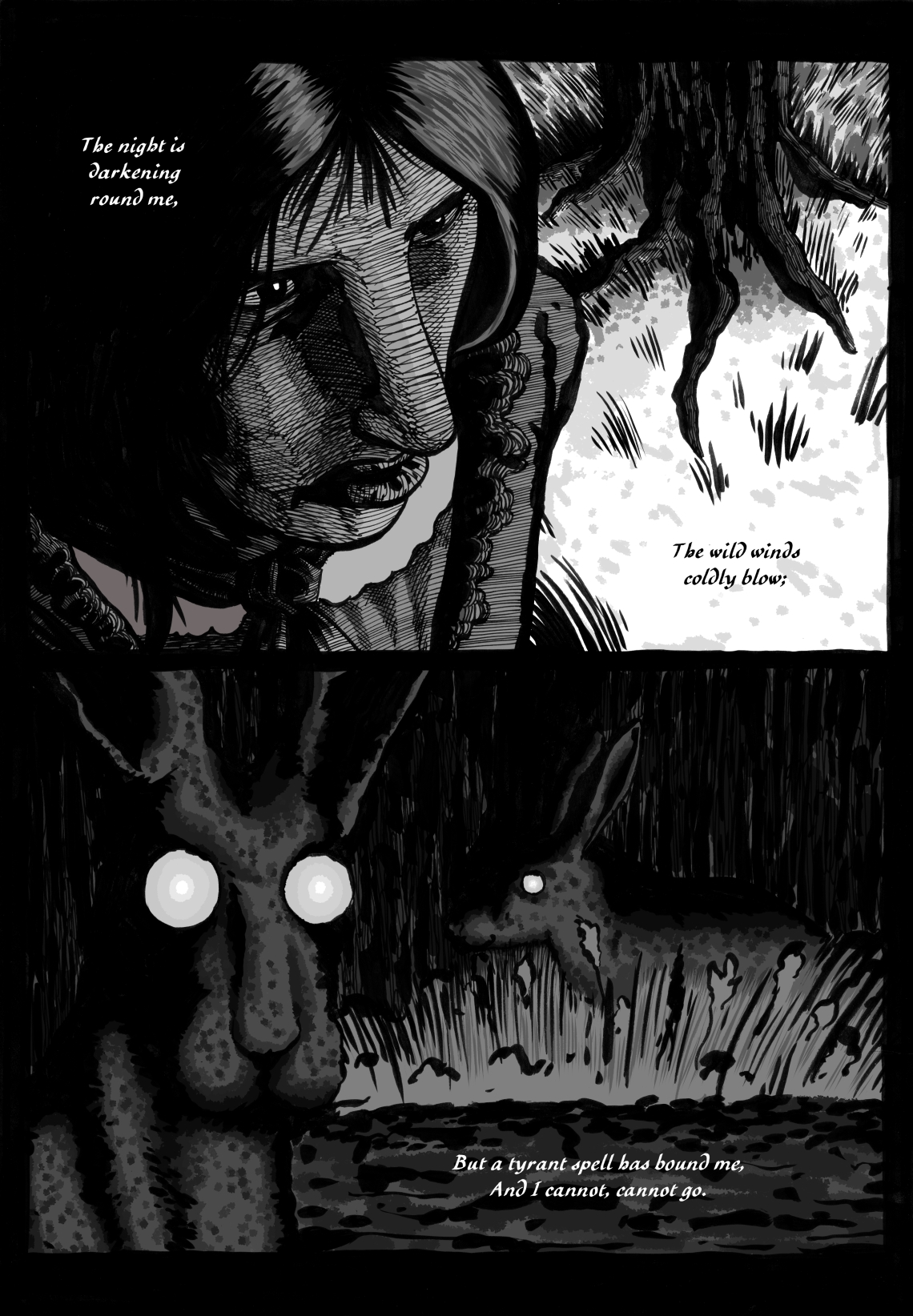 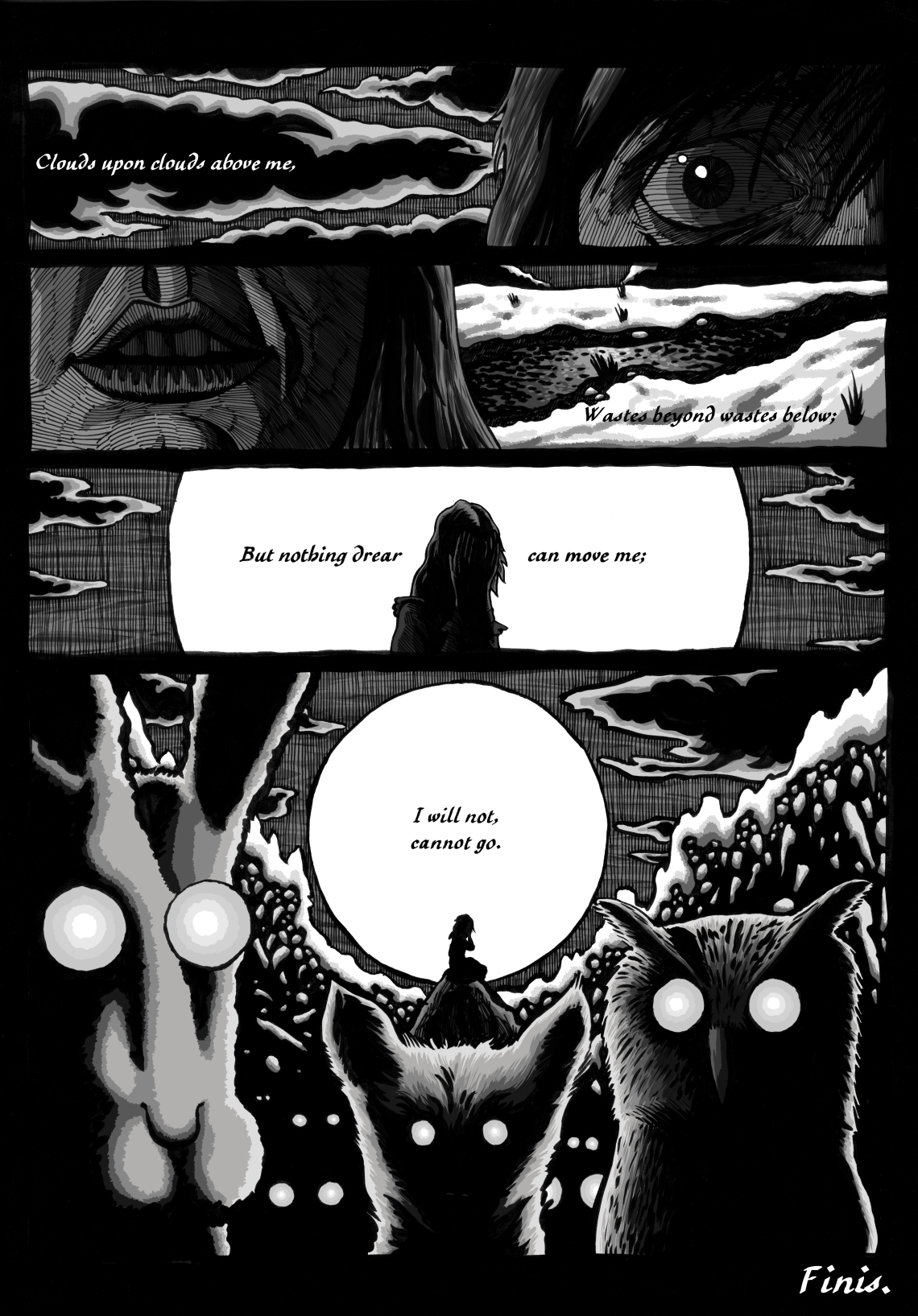 Well here we are! It’s been a long time coming – the first instalment of Tales From The Border. Thank you for waiting. I’ll be putting out material fairly regularly now, with a new comic strip at least once a month. So there’s lots more coming soon.

Emily Brontë first entered my life about four months ago, when I read Wuthering Heights. It completely absorbed my world for a week, and I count it now among the very best novels I’ve ever read. It is one of the most emotionally brutal narratives I’ve witnessed in any artistic medium. The sheer degradation and horror that Heathcliff enforces on everyone else in the story marks the landscapes that surrounds them forever. Many have seen him as a romantic hero, but there is nothing romantic in what he does. Rather, he is THE Gothic villain, a vampiric presence who perverts and destroys all of those around him.

As much as Heathcliff and Cathy absorbed me, what truly entranced me was the Yorkshire landscape. I actually started reading the novel partly because I was living in York at the time and would be leaving to go to Dundee in Scotland. I carried that book everywhere with me, thumbing through pages and witnessing the country that it so perfectly captured. I got to witness much of the landscape Brontë wrote about when my Dad and I drove up to Dundee.

One day I would love to create my own interpretation of this incredible story; for now, though, I wanted to adapt something shorter by Brontë. Many people will only have read Wuthering Heights, which is a shame because her poetry is just as moving and compelling. I found “Spellbound” in an anthology of folk horror poems called Folk Horror Revival: Corpse Roads (an excellent anthology that I highly recommend). This collection very much informed my interpretation of Brontë’s eerie text. The weirdness, the creepiness of the countryside was something I wanted to capture here. The more my artistic identity forms, the more this theme seems to be of central concern to my work. The landscape, particularly the wild, beautiful, terrifying landscape of rural England, entrances me in both it’s mythic potency and it’s strange folklore.

Fittingly, I listened to quite a few albums centered on folk horror whilst illustrating this adaptation. Of particular inspiration was the A Year in the Country project, created by Stephen Prince, many of who’s releases are available on Spotify. A track that really enthralled me, and was played on repeat was “The Abney Ritual” by Bare Bones, from the release The Forest / The Wald. Check it out:

In addition to this wonderful album, I listened (as I often do) to the wonderful scores of Nick Cave and Warren Ellis. Their scores for the films The Assassination of Jesse James by the Coward Robert Ford and The Road featured heavily this time around.

Anyway, those were just a few notes on the inception of “Spellbound.” Thank you for stopping by and reading this instalment of Tales From The Border. Please leave a comment if you’re so inclined; I would love to hear what you all think, good or bad! I’ll be back soon with a new strip for you folks. Stay tuned.