Page 5 proved easier than Page 4 but still had some frustrations, in particular panel 3. When I initially finished inking the page, panel 3 was very unclear. There was just so much linework it became difficult to make out. On my convenor’s suggestion I decided to drop some white spotting onto the face of the boy and this worked much better, the panel became illuminated. I’m quite happy with how this page turned out – I feel it conveys the weight of death on the scene and conveys the mournful atmosphere I intended.

Page 6 featured my first page with heavy lettering, and after lettering the page decided that I would redo all of my lettering digitally. My hand is just not quite good enough yet to do it by hand, so for now I will continue to letter by hand for practice and then cover it digitally.

This page, as seen in my first journal, had been planned out as a dialgoue sequence, with no planning for the words, so when it came to drawing the page I was pretty much writing the dialogue on the page. This has worked fine for these first 10 pages as atmosphere, environment, and facial expression on the whole is more interesting to me than the written word, but I do think I was given an opportunity to expand on some of my themes here in a way that was impossible with imagery. When the old man sees the dead boy, he muses on this:

“Now he is gone, because a soldier found an arrow in a tree and decided someone must die. Because a law written on parchment dictated so. When our young die in such horrid circumstances – in starvation and murder – tell me, stranger, what future will we ever see?”

To which the knight responds:

“There is no future, old man. Only the present. The future is dead.”

This expands on one of the central themes of the work for me – the impossibility for us as a society to imagine the future. When we do see futures imagined in science fiction nowadays, it is often the future of yesteryears – Blade Runner 2049 still holds on to the imagery of the original, complete with neon Atari logos all over the film. Reading Mark Fisher’s Capitalist Realism and his writings on hauntology in particular inspired this theme in the comic. I am thinking about dedicating the comic to Mark Fisher as a result, as I think his work on hauntology and the erie has informed so much of my ideas on art and comics.

One of the other inventions that happened on the page through writing the dialogue this late was the revelation of a new incident – that the boy died because the soldiers found an arrow in a tree. This was unexpected and suddenly I realised that this had potential for more drama, that the knight is technically at fault for the boy’s death, adding another wrinkle of guilt and remorse when the old man and his wife feed the knight later. Once I had reached this point however, I quickly realised for two reasons that I needed to massively revise the ending. After the old man’s monologue on page 9, I was going to have another monologue by the knight in retaliation, which would reveal who he is, where he came from, why he is the way he is etc. However, I decided that for this to happen in less than 10 pages into a graphic novel was overzealous on my part – I wanted to spread it out, get the reader thinking about what kind of man the knight is before I revealed the truth behind him. Originally this monologue was going to be followed by a 5-6 page dream sequence that would illustrate the monologue, showing the knight in the Crusades. At this point in time, I simply didn’t have time to do this. SO I shelved these plans instead and rewrote the ending so that we ended on the knight contemplating the death of the child. The pose in the final panel was intended to evoke Tolkienian imagery; Aragorn smoking his pipe, and specifically Alan Lee’s illustration of Gandalf smoking in Bag End. The parallel was drawn so that I could get the reader to question what the knight’s role is as the supposed hero of the story, when I’ve already shown him to be a coward at best and a murderer at worst. 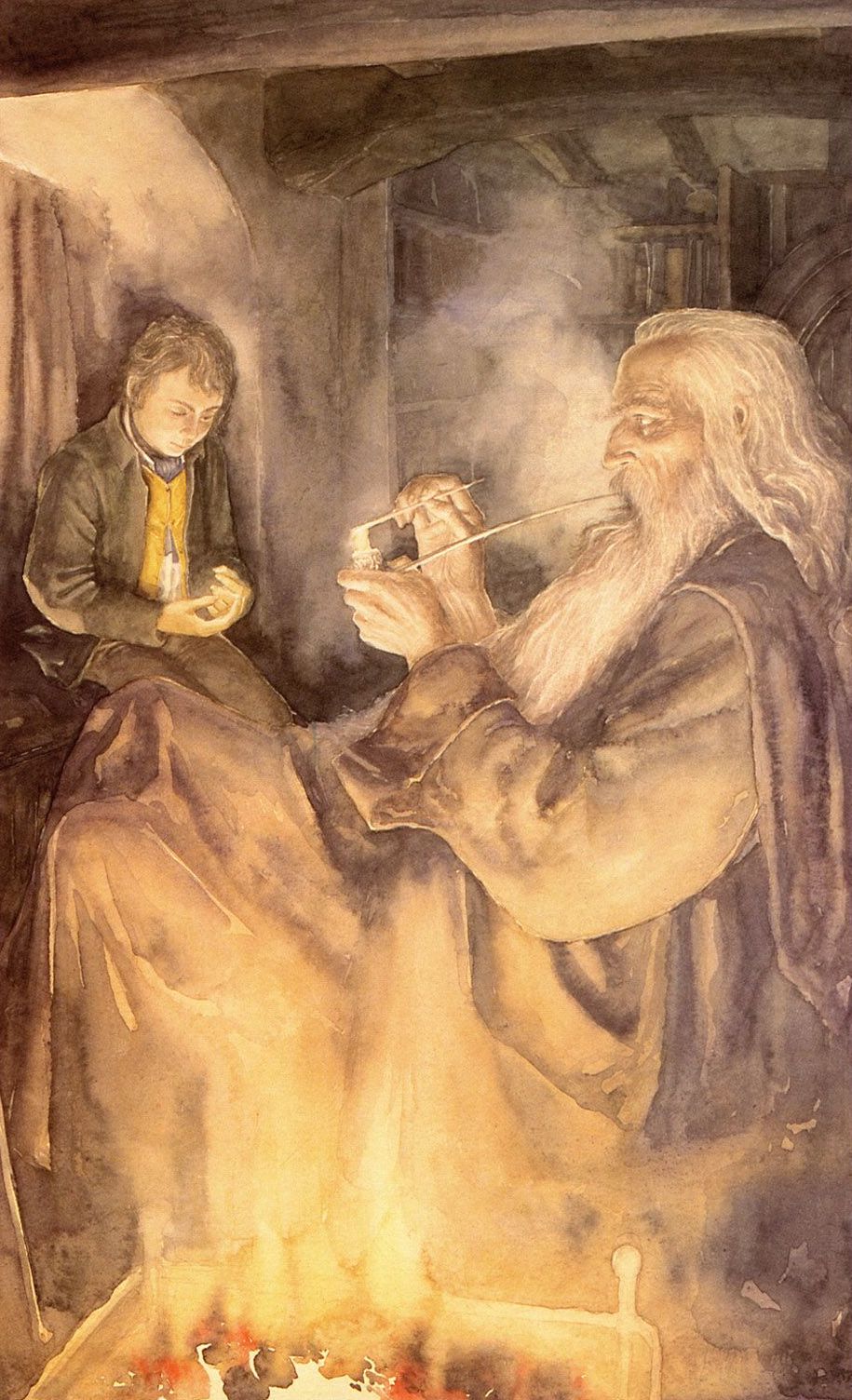