So it’s the end of the year and I thought it would be a good time to do a Top 10 of the films I’ve seen (so far) from this year. I haven’t been able to see all the films I’ve wanted to this year, so bear in mind that given another few months this list might look a bit different. As such, I’ll put a list at the bottom of this post of the films I missed that looked like they could’ve ended up in my Top 10. Anyhow, I hope you enjoy this list and tell me in the comments what your favourites from this past year have been! 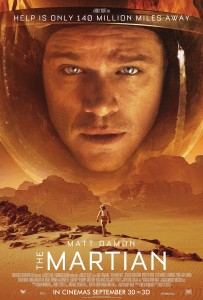 Ridley Scott’s best film since Gladiator (2000) and one of Matt Damon’s very best performances makes The Martian the best of the recent space-faring hard science-fiction films we’ve seen. Mark Watney, an astronaut, is left stranded on Mars by his crew and has to survive the harsh environments whilst the best scientists on Earth collectively find a way to bring him back home as soon as possible. Whilst the film does get pulled down by the heavy-handed science talk at points, The Martian is a great testament to the human spirit and it’s quest for further knowledge. I wouldn’t be surprised if The Martian does spearhead a renewed interest in space. 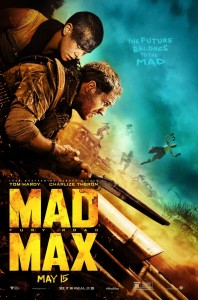 Australian director George Miller returns to the world of Mad Max in the brilliantly anarchic Fury Road. In what is essentially a remake of Buster Keaton’s The General (1926), we see Tom Hardy take up the role of Max Rockatansky and Charlize Theron’s kick-ass Furiosa team up to escape Immortan Joe and his War Boys. Never before has the world of Mad Max been so fully realized. It is perhaps the best Mad Max film to date and easily the one with the best action sequences. It’s depiction of women has also lead to many critics calling Fury Road a feminist action film, and it’s certainly something I would agree with. A new action film for a new century.

Director Matthew Vaughn teams up with comic-book writer Mark Millar for another brilliantly irreverent tribute / parody to genre fiction, this time spy literature / film with Kingsman. Colin Firth stars as James-Bond-type spy Harry Hart, who recruits street-kid Eggsy to the Kingsman secret agency. Together they’ll combat dangerous threats and become good friends. As deliciously violent and hilarious as Vaughn / Millar’s Kick-Ass (2010), Kingsman ranks as one of the best comic-book adaptations of the new century and is just pure cinematic pleasure from start to finish. 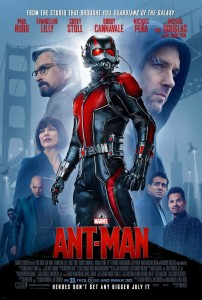 Who would have thought that Marvel’s smallest hero would have made for a better film than an Avengers sequel? Paul Rudd’s effortlessly charming Scott Lang teams up with the original Ant Man Hank Pym (Michael Douglass) and his daughter, Hope Pym (Evangeline Lilly) to save the world from Pym’s ex-student Darren Cross (Corey Stoll). It’s a film that is refreshingly simple, unlike the rest of the Marvel slate, and has a whole bunch of characters that you just can’t help but like immensely. Marvel’s best film this year for sure and definitely the best superhero film of 2015.

Slow West is one of the best westerns I’ve seen in a while because it abandons the modern, gritty, McCarthyesque aesthetic that so many modern westerns go for and instead returns to the romanticised, beautiful (but deadly) West that originated in the films of John Ford. Jay Cavendish, a Scottish teenager, has come to the American West to find the woman he is infatuated with / loves. He employs a bounty hunter named Silas (Michael Fassbender) to protect him on his journey, and as they traverse the wilderness and meet both friend and foe, their relationship will have ramifications for all of the characters they meet. It’s beautifully simple and ends in a climactic shoot out that must rank as one of the best action scenes of 2015. Heartbreaking and bittersweet, Slow West is a solid, great film. 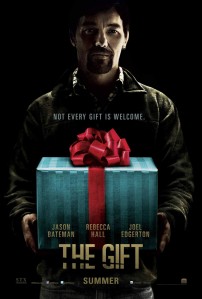 Joel Edgerton’s directorial debut is one of the best thrillers in years. It’s a genre that has been done to death, so it is truly wonderful when a new directorial voice comes along to shake things up. When a couple bump into a childhood friend of the husbands, they get involved in a friendship that gets more and more intense with each meeting and gift. To say much more would be to give away some great twists and turns. The Gift had me sitting on the edge of my seat throughout. It’s greatest mark of quality is that you can see yourself in all of the main characters – we have been all of these people at some point in our lives. Not to be missed.

Whilst It Follows didn’t necessarily scare me, it’s creepy atmosphere, 80s Carpenter-esque aesthetic and skilful storytelling elevate it to be the best American horror film of the last decade, if not this century. Weaving a delightfully creepy story out of themes such as STDs, coming of age, childhood innocence, and suburbia, It Follows is a strange blend of horror film, coming-of-age film, and art film. It is taken to higher levels by the stunning electronic score by Disasterpeace. Stunning in its originality and intelligence.

As you can tell from my glowing (and spoiler free!) review of The Force Awakens, this film not only reinvigorates a classic franchise but also kicks off a wonderful new story with some great new characters. Poe Dameron, Rey, Finn, and Kylo Ren are some of the best characters that the cinema of 2015 has to offer. Full of emotional depth and genuinely thrilling action, The Force Awakens ranks as one of the best films in the franchise.

Simply put, Macbeth is an absolute masterpiece. Director Justin Kurzel masterfully adapts the Shakespearean tragedy, exploding the world of the stage onto the moody landscapes of Scotland. Beautifully shot and powerfully acted, Macbeth never forgets that it is a film first and not simply a filmed play. This is its greatest strength. Michael Fassbender also turns in a career defining performance in an original interpretation of the classic role. Jed Kurzel’s powerful score is also the best film score of 2015. Moody, bloody, and powerful, Macbeth is everything you could want in a Shakespeare film adaptation. It’s also, in my mind, the best film of 2015.

As I said in the intro, I missed a few films this year that I feel could have changed this list somewhat. Here they are below:

Amy
Beasts of No Nation
Bone Tomahawk
Brooklyn
Carol
Cobain: Montage of Heck
Creed
The Diary of a Teenage Girl
The End of the Tour
Ex Machina
The Hateful Eight
Inside Out
Listen to Me Marlon
Me and Earl and the Dying Girl
The Revenant
Sicario
Straight Outta Compton
Tangerine
While We’re Young
The Witch
Youth

Thanks for reading everyone! I hope you’re all having some good time off work on holiday and enjoying it with your families. Please comment below with your picks for the best films of the year!